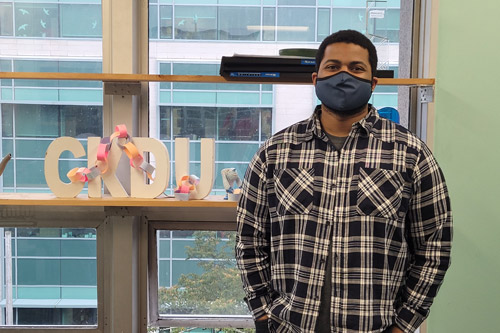 How long have you two been involved with CKDU and how did you first hear about the station?

I have been involved with CKDU since 2019, I used to do “Fill in” Shows when there was free time in the schedule. I have been the Music Director since late April. I first heard about CKDU From my dad I think. He used to listen to CKDU and at one point he was a volunteer. That was long ago though.

My Advice to other MDs to get Announcers and DJ’s to play new music is just to have good communication with the DJ’s. Make sure you are aware of what they are playing and if their show has a certain theme or format let them know about songs that fit that criteria. Sometimes Announcers at the station will even ask me if I can reach out to an artist or label in an official capacity to hunt down a song or album. I send out emails to the DJs telling them what I’ve added over the last little bit. And If a certain recording fits a show well, I will send an email specifically to the DJ or tell them if I see them in the station.

What is the part of your job you love the most?

I love finding music that I may not have found on my own. Not only have I found so many Gems to add to the station but I also find so many songs and albums that I enjoy and they seep into my personal listening and I love it. I also love making the charts every week, and seeing the stuff we have in common with other stations and the stuff we might be playing first 🙂

What has been your favorite album released this year?

That is a hard one, It seems every week I fall in love with a new album. I would have to say Come Back to Life by The Zolas, which is out on Light Organ Records. All the songs are so catchy.

I never get tired of listening to the rapper Killy. He is one of my favourites and his music has helped me through some hard times.

Which artist/band has put on the best live show you’ve ever seen? Have you attended a live show recently now that tours are beginning to happen? If so, how was it seeing live music again?

On Valentines day 2020 I saw The Trews. That was probably the best show I’ve been to. Not only just the music and how well the band played but the folks I was with and the experience was A1. In July I saw Hello Delaware play along with GoodDearGood and The Book Buddies(All Local) It was AMAZING to be back to seeing live music after a year and a half but people had to be seated at tables and couldn’t get up and feel the music, and because of being seating at tables there was only a limited amount of folks who could attend, I still loved it though

Who is an artist or band totally outside the realm of the music you play on CKDU that people might be surprised to know you love?

Well, my favourite band ever is Dokken, and CKDU doesn’t play much 80s Hair Metal. But I don’t think folks would be that surprised. I’ve also played Dokken on CKDU before. Shhhhhh…. Don’t tell the Music Director

If you had the power to instantly change one thing going on in the world at the moment, what would it be?

I would probably end the pandemic. I think that would have a positive effect on on Everyone

After highschool I took the Radio, Television, Journalism program at the Nova Scotia Community College. I had fun, made friends, put myself out there a bit more and it set me on the path I am currently walking. There was hardship and strife but I wouldn’t trade it for anything. Shout out to my fellow classmates, I am proud of all of you.

If you could choose, what time period in the past would you most want to travel back to visit and why?

I would definitely go back to the 1980s. It’s not like super far in the past, plus I love 80’s movies, music, history and so on. Plus if I got stuck in the 1980s It would only take me between 30-40 years until I was back in the current day

I love to get Alexandra’s Pizza in the city, usually from the Woodside location. Actually instead of getting pizza from there I usually get Poutine. For those of you who may not know Poutine is Fries with Gravy and Cheese Curds. Some folks add other stuff to Poutine as well. Despite living my whole life in the Halifax area there are many restaurants I have yet to try, but I don’t plan on going anywhere so I have lots of time.

Music brings me the most Joy. I listen to it constantly, it cheers me up, it teaches me things and connects me to people. It’s the one thing that never lets me down and is always there when I need it. I owe a lot to music.

Do you have any current favorite shows you’re enjoying/binging? How about a movie (new or old) that you’ve watched recently that you loved?

I don’t watch too much TV anymore actually, but the last couple Saturdays I have been hanging out with a friend and I have convinced her to watch The Walking Dead with me. I have seen seasons 1-10. And she has never seen the show. So it’s gonna take a lot of Saturdays to get to season 11. But I am up for it.

With it being October, are you into Halloween? Do you have any fun Halloween memories or costumes from when you were a kid?

I do like Halloween. When I was younger I use to trick or treat with my Sisters but they were quite a bit older than me and stopped trick or treating way before me and I didn’t have too many friends so for those in between years I often went alone(Well alone with the couple hundred kids roaming the streets) But the last year I went out with friends. It was great, so many laughs and so much fun, and of course candy. I was dressed as a COP, But by the end of the night I had lost my Aviators, and we retraced some of our steps to look for them but never found them. If you see a pair of Aviators on the ground, I call dibs.