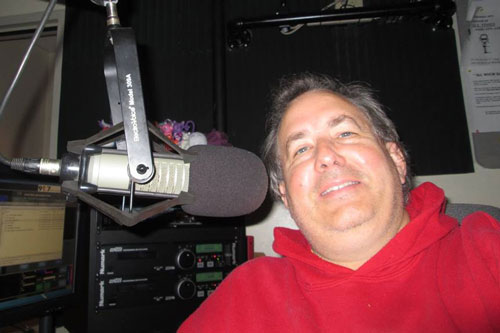 July Genre DJ of the Month:

Tell us about WSUW. How did it get started and how did you first hear about it?

91.7fm WSUW, The Edge, is a 1300 watt radio station on the campus of the University of Wisconsin Whitewater and covers about a 25 mile radio signal in all directions from it’s tower on top of Hyer Hall in Whitewater. The communities of Whitewater & Fort Atkinson are it’s primary target cities. Whitewater is located in Walworth county in south east Wisconsin between Milwaukee, Madison & Janesville. WSUW is in an Alternative music format today but originally back in 1966 when it got started, played an easy listening / adult programming format. First heard of it back in the early 90’s but didn’t become a dedicated listener until the fall of 1994. Strange fact : I was a student at UWW for a year in 1985 but never knew the station existed…

How long have you been at WSUW? What is your history there?

Have been a DJ at WSUW since 2000. My first show at that time was a 10pm -12am Friday Night RPM show called Friday Night Beatings. When I jumped aboard, WSUW needed DJ’s to cover around 18 hours of programming a day. DJ’s spun CD’s or vinyl to cover the on air music during that time. At some point around 2006-07, WSUW took on Musicmaster computer programming to replace the need for DJ’s to play CD’s all day. This was also the same time I took on the role of Hip Hop director to program all the music into Wednesday’s computer automated all day Hip Hop show called Hip Hop Hump Day.

Your are both the Hip Hop and Electronic MD at WSUW and it sounds like you program/host a number of shows there. Tell us more about them?

Saw Pink Floyd live as a 14 year old in Milwaukee County Stadium. Huge today as it was one of the last PF shows with Roger Waters in it. Been to a lot of shows: Bjork in Chicago in ’07, Kraftwerk in ’05, Rolling Stones in the late 80’s, The Who in the early 80’s, 9 Inch Nails w/ Hole & Marilyn Manson in ’94 was awesome. Too many great ones to just pick a favorite.

Who is an artist or band outside the realm of Electronic/Hip Hop radio that people might be surprised to know you love?

I really got into that 90’s Ska & Swing movement. Ska bands really crank up a party on the dance floor. Loved that era with Skankin’ Pickle, Mustard Plug, Inspector 7, Aquabats…Have always had a soft spot in my heart for Bjork as well. Will always love that 1st Bjork CD.

Best childhood memories are probably the strongest in my 8th grade to 11th grade years. I was always the person kids wanted to know what I was listening to and what bands were happening. Started out in those years listening to Led Zeppelin, KISS & Rush. Eventually found the New Wave movement and started listening to The Clash, DEVO & the Ramones. Grew up in a strong right wing community in Oconomowoc, Wisconsin and the New Wave movement was not accepted well at all. Kids were all stuck on bands like REO Speedwagon, Journey & Foreigner. Am glad I didn’t get beat up for being a closet Punk anarchist.

Been married for over 25 years and have 3 kids. The births of my kids have to rank on top of anything I’ve ever accomplished with music as a DJ or a musician. But hooking up with WSUW back in ’94 as a fan and a DJ in 2000 ranks high as well.

I would love to go back to that 1962, ’63, ’64 era when the Beatles first got started and be a part of Beatlemania. I was born around that time but didn’t get into them until the end of the 60’s. To see Led Zeppelin in 1971-73 would have been pretty great too.

Elias Inn in downtown Watertown brews up a real great fish fry on Friday Nights. Always worth the wait if crowds build early to get in.

Family happiness is huge. You always want to make sure your family is happy being who they no matter what your outside interests are.

Don’t have much time for TV these days. Usually catch the local news for updates and weather when I do tune in.

Finally, and most importantly: We’re in the throws of summer. What’s your favorite part of this time of year?

Summer is usually your biggest time of the year for music festivals. Milwaukee has Summerfest which runs around the end of June, through the 4th of July and ends shortly thereafter. Some days are great days, somedays have some weak lineups. I try to at least get there a couple times on some of the stronger days to see what today’s new talent sounds live.