March Genre DJ of the Month: 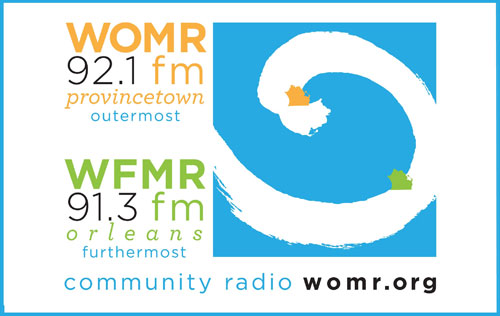 Tell us about WOMR.  How did it get started and what unique role does it play in the Cape Cod radio market?

In 1976 a small band of radio visionaries was inspired to create a community radio station in Provincetown Massachusetts, at the tip of Cape Cod. It took several years for them to realize their dream, but finally WOMR (OuterMost community Radio) went on the air on March 21st 1982 with 1000 watts at 91.9 FM. We moved to 92.1 in 1995 to raise power to 6000 watts and reach a much wider audience on Cape Cod and the South Shore, and more recently added a second transmitter in Orleans which broadcasts our signal at 91.3 FM to improve our signal from Orleans to Hyannis. We’ve also been streaming since ’03, carry podcasts of our locally produced spoken word shows at womr.org, and archive our music shows with radiofreeamerica.com per the DMCA.

Over the years hundreds of people have contributed their time and talents to create WOMR’s diverse and special programming. There are very few, if any, radio stations like WOMR in the country. We are a non-profit organization, not affiliated with any educational institution, and derive our main financial support from listeners and businesses, plus grant making organizations like the Massachusetts Cultural Council and the CPB. Involving the community in our programming is our mission and we invite anyone to become part of WOMR.

Our 24/7 programming is mostly music (including classical and opera, folk and bluegrass, blues and celtic, show tunes and movie soundtracks, jazz and jazz and jazz and more), plus many locally produced spoken word programs covering local news, arts, environment, health and other topics. Programming decisions are made by an elected committee accountable to the Board of Directors, and radio hosts are completely independent in terms of content based on their proposals to the committee…. no play lists, no wheel, no required heavy rotation….

How long have you been at WOMR?  How did you first hear about it & what is your history there?

I’ve been on the air at WOMR since 2001, shortly after I moved to the Cape. As a radio host and concert presenter in the Boston area, I had been aware of WOMR, but really had no idea of the unique role WOMR served in the community until a friend brought me to the annual Music Food and Wine Festival in 1999. I started subbing when needed, started hosting my own show at 6am Sunday morning in 2002, and filled in for one of WOMR’s earliest hosts on his weekly Monday morning folk show when he became ill later that year. When Jack passed away Spring 2004, our Programming Committee awarded me that time slot to play folk and acoustic music, traditional and contemporary. I called the show “The Old Songs’ Home” for a song that had recently been released by Shelley Posen from Ontario. As a community radio station, most of the heavy lifting is done by volunteers (3 full-time paid staff manage our station, aided by nearly 100 volunteers including all the on-air radio hosts). At various times, I have served on the Board of Directors, Events Committee, Programming Committee, Policy Committee, Personnel Committee, and Strategic Planning Committee.

You have a show called “The Old Songs’ Home.”  Tell us a bit about the show.

The show varies from week to week, but nearly always includes a substantial amount of new music. I explore historical themes and current events, string bands and harmony ensembles and singer-songwriters, and preview upcoming local concerts and regional festivals. I have interviews with live performances in the studio, including local performers just starting out and ‘stars’ like Rosanne Cash, Tom Russell, Dar Williams and Cris Williamson. Bluegrass, acoustic blues, cajun, country, indigenous and world music all slip into the mix.

What was your favorite album of 2018?  What upcoming 2019 release are you anticipating most?

I think my favorite album of 2018 was Mary Gauthier’s Rifles and Rosary Beads, all co-writes with veterans or spouses of veterans, and named Album of the Year by Folk Alliance International. Eliza Gilkyson’s Secularia was also high on my list. So far in 2019, Lula Wiles What Will We Do, John McCutcheon’s To Everyone In All the World, and Songs of Our Native Daughters have been very exciting…. and I look forward to Smithsonian Folkways 6 CD Box set retrospective of Pete Seeger coming out on his 100th birthday in May.

Who is an artist or band completely outside the realm of folk and acoustic music that people might be most intrigued to know you love?

My first real music love was The Everly Brothers, and I am still hooked on close harmony singing. Three trios that I can always listen to are Brother Sun, Finest Kind, and Kallet, Epstein and Cicone. People might be surprised at how much I loved seeing The Clash, Talking Heads, U2, Tom Petty & the Heartbreakers, and Springsteen. It’s pretty hard to name a best live concert….I’ve produced more than 1000 of them, and there have been many magical shows. Of course, being in the audience has benefits, too…. Ones that stand out… Kweskin Jug Band circa 1968, Bonnie Raitt early 70s in Harvard Square, Richard Thompson, Bruce Cockburn….and I did see Joan Baez Farewell tour last fall, very memorable.

Do you think social media has generally been a positive or negative force in how people interact and stay in touch?

Stay in touch? Positive. How people interact? A lotta negative, but some positive. The hidden part of the iceberg of social media is examined in a book just out, ‘Surveillance Capitalism’…check it out.

I think I’d like to walk across the bridge in Selma, March 1965, for the right to vote. There’s so much we take for granted. And music gave people strength to carry it on….. My oldest daughter gave me a used copy of Guy and Candie Carawan’s SNCC Freedom Songs book from ’63 for my birthday recently. I like to think that the power of music, of people singing together, continues to inform my work as a curator of music on the radio, and in the live events I present.

Besides WOMR, what other things do you do to keep busy?

No greater pleasure than growing organic vegetables….some in our yard, some in the community garden. The deer, bunnies, voles, wild turkeys and 6 leggeds even share at times, so we get to eat some of what I grow. I’m also Music Director of the Harwich Cranberry Arts & Music Festival Inc, a 45 year-old nonprofit in our community supporting scholarships and other programs for youth and families, so I get to keep my hand in presenting live music.

A fool and his money are easily parted.

Dog or Cat?  When I was 20, dog. Now, cat.
Cold drinks or hot ones?  Ice cubes rule.
Morning Person or Night Owl?  Yes, both.
City or Country?  Country to live, city to visit occasionally.
Watch TV or Read A Book?  Yes
Winter or Summer?  Fall or spring.
Dine or Delivery?  Home cooked by me
French Fries or Onion Rings?  Nathan’s fries.
Pants or Shorts?  Always.

Finally, living in an area where seafood is so prominent, is there any seafood in particular you aren’t a fan of or does anything go?

Oysters, lobsters, clams, bluefish, cod, yummmmm. Skate? not so much…..