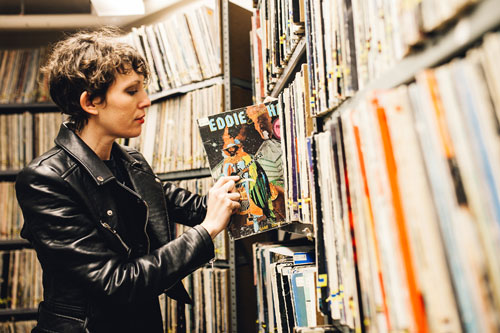 How did WSFM/AshevilleFM get started and how did you first hear about it?

Asheville FM began broadcasting as an internet radio station in September of 2009. In late 2013 we filed for a terrestrial Low Power FM frequency with the Federal Communications Commission, and in March 2014, our application was granted! We went on the air at 103.3 FM in April of 2015. I first heard about Asheville FM from a friend who volunteered with the station. I was relocating to Asheville and I wanted to get back on the airwaves. I contacted our volunteer coordinator, Jess and she was so welcoming. I knew it was going to be the perfect fit.

How long have you been at WSFM/AshevilleFM? What is your history there and what duties do you undertake as the station’s World Music Director?

I have been a volunteer at Asheville FM since August 2018 and I’ve been hosting my show “Not Your Mother’s Tongue” at Asheville FM since November 2018. I took over the duties of the World Music Director in January 2019 which include deciding which world albums will be added to our library, as well as reviewing those records so my fellow DJs have some background about the artist and recommended tracks to play on their shows. I also build and maintain relationships with record labels and distributors so that we receive even more new and exciting world music releases.

Tell us about your ‘Not Your Mother’s Tongue Radio Show.’ Is there a particular form of world music you concentrate on or is it more wide ranging genre-wise?

“Not Your Mother’s Tongue” is a weekly 2 hour world music radio show that spans many genres and many countries. I focus on music from Africa, Southeast Asia, the Middle East, but I play music from every corner of the globe. It is very important to me to expand the definition of world music to make it more inclusive and approachable. It is a pet peeve of mine when people say they don’t like the term “world music” or think it is something to be embarrassed by. World music to me is music from people from all over the world, be it hip-hop, electronic, funk, traditional music, whatever. I especially love the interplay of traditional with modern or organic with electronic. There are some really amazing artists and labels working to broaden the term “world music” and I want to support them by playing their music on my show.

My all-time favorite artist is Nina Simone, but I’d also put William Onyeabor, Fela Kuti, CAN, and Tunji Oyelana up there.

Definitely Antibalas. I’ve seen them twice, plus an additional time when they were the backing band for the Fela! Musical. They put on the best show! I can’t stop dancing from the moment the start playing. They are amazing! I also had the absolute fortune to see ESG in Asheville in August and that was an incredible show.

Who is an artist or band outside the realm of world music that people might be surprised to know you love?

I’m going to get made fun of real hard for this one, but it’s definitely Elton John. “Madman Across the Water” is one of my favorite songs.

My parents listened to a lot of reggae when I was growing up. One night my brother and I refused to put on our pajamas and go to bed. So my dad decided to play Bob Marley’s “Jammin’”, except every time Bob Marley said “jammin’” my dad would sing over him and said “pajamas.” From that night onward, my brother and I would beg for my dad to play “The Pajama Song.” He only ever played it that one time because I am sure he was worried we’d figure out he wasn’t saying “pajamas” but “jammin’”. It wasn’t until I was much older that I figured it out.

Living overseas. After college, I spent a year living in New Zealand. It showed me a life and culture outside of my own. I realized the way I view the world and society is through the lens of being an American, and when you spend time outside of your home country, you realize that lens distorts and warps. I also realized how there are many ways in which people are different, but in fundamental ways we are all the same. That’s what draws me to world music. It exposes me to the music and culture of people from all over the world. I believe that sharing music from other parts of the world connects us to the people and history of that area. I have learned so much through my discovery of new world music, and it’s helped me to empathize and understand people from countries outside of my own.

I’d want to go to the mid- to late- 70s so I could go to as many disco clubs I could and dance like crazy in some funky colored jumpsuits.

Do you have a favorite restaurant in Asheville that you always make sure to take guests/visitors to?

I’m a vegetarian so I like to take people to places that are veggie-friendly but still serve meat-options. The best place for that in Asheville is BimBeriBon. They are an entirely gluten-free restaurant, so it is also good for any GF people, and there are tons of vegetarian and vegan options.

My partner, Patrick is my bestie, PIC and favorite person. We’re always having fun together. Hosting my radio show “Not Your Mother’s Tongue” on Asheville FM is my weekly highlight. I love it so much. Sharing music with people is one of my all-time favorite things, and I love programming my show and presenting it to my listeners.

Dog or Cat? Dog. I’m allergic to cats.
Morning Person or Night Owl? Night owl, but really I’m an Afternoon person that’s when I have most of my energy.
City or Country? City.
Beach or Mountains? Beach. I’m from South Florida.
Watch TV or Read A Book? Both.
Sunny or Rainy? Sunny.
Dine or Delivery? Dine.
Beard or Clean Shaven? Beard.
Pants or Shorts? Pants.

RuPaul’s Drag Race. Can’t stop. Won’t stop. RuPaul’s closing line at the end of each episode is the best advice I’ve ever heard: “If you can’t love yourself, how in the hell are you going to love somebody else.”

Finally, and most importantly… with Thanksgiving coming are you pro or anti cranberry sauce and if pro, do you prefer whole berry or the jellied kind that slurps out of a can?

Because I’m a vegetarian, Thanksgiving is not a holiday I look forward to. That being said, if I had to eat cranberry sauce, I’d definitely want it to be whole berry. But in general, I’d say I’m anti-cranberry sauce.