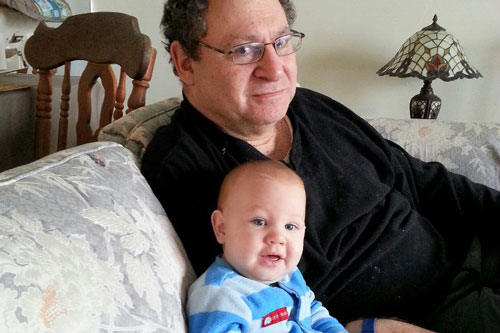 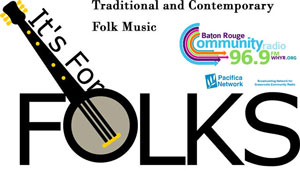 How did your show “It’s For Folks” get started and how did it get syndicated?

I’ve been doing a folk show on and off since 1971 when I was a college student. Folk music was a big part of college culture then (anti-war protests, etc.) After I became a college professor (Mass Communication) I didn’t really have time to do a radio show. Later in my career. I became General Manager/faculty advisor for a college station and used my power to give myself a folk show spot! The syndication part came from the Pacifica Network affiliation of my current “home station,” WHYR, Baton Rouge. “If you build it, they will come.” If you do a consistent show in a professional manner, other stations pick up on it and “cha-ching,” you’re syndicated.

Is there a specific kind of Folk music you concentrate on or does anything go?

I have a pretty traditional approach to folk music. I stay away from electric guitars and drums and full bands. I play a lot of original, new songs that are written and played in a traditional style.

What was your favorite release of 2019?

Kora Feder, “In Sevens.” She’s a young singer-songwriter. Great voice, great messages on a variety of subjects. I hope she gets discovered.

Is there any music slated for release in 2020 that you are most excited about?

I don’t really pay attention to “upcoming releases”–they just sort of appear in my mailbox. I listen to everything that comes in. New ones that I’m excited about include Andrew McKnight’s “Treasures in My Chest” and Annette Wasilik’s “Love and Fire.” I love the surprise of a great album by a New Artist or something completely different from someone who’s been around for a while.

Joni Mitchell and Paul Simon have been my go-to artist for 50 years. I don’t think either one has written a bad song. And “American Beauty” by the Grateful Dead. Best album. Ever

Oddly enough, since they aren’t folk, Better Than Ezra. Since they are from Baton Rouge, I’v seen them many times. But they put on an unbelievable show at Irving Plaza in New York City about 10 years ago. Perfect musically, and so much energy,. The opening act was Sixpence None the Richer, who, despite the cheesy single, “Kiss Me,” were a very talented group. Leigh Nash is a great lead singer, performer.

Who is an artist or band totally outside the realm of Folk rock music that people might be surprised to know you love?

The early 70s hard rock band, Mountain. Their bass player, Felix Pappalardi, got his start accompanying folk musicians, but Leslie West is a powerful front man. Yes, I like loud rock and roll sometimes. And techno.

The day Sally Starr, host of a children’s TV show in Philadelphia, came to the grand re-opening of Jack’s Delicatessen. The place was packed–I don’t even think I could see her. But I love the mayhem that surrounds celebrities. I wish I could have seen the Beatles in Shea Stadium!

A rally outside Independence Hall in May, 1970. Ralph Nader and Senator Joe Clark of PA were the featured speakers. It was just after the shootings at Kent State, and I had just mailed in my acceptance of admission to a university in Cleveland, just 30 miles from Kent. I’d been pretty conservative, both musically and politically, until then. But then I realized that, in the words of folkie/activist/actress Holly Near, “It could have been me, but instead it was you.” I realized that we are all in this together. As I’ve watched my friends and classmates grow more conservative over the years, I’ve been steadily growing more progressive and liberal.

I think either the Civil War or the American Revolution. Not that I like War, but we always seem to be at war, and in those two, I knew exactly what we were fighting for. It was real, and it was personal. Freedom.. Who wouldn’t fight for that?

It’s pretty hard to find bad food in Southern Louisiana, and I’m not much of a foodie, so any place is fine. But if you’ve never been to a Waffle House, I’ll take you. In New Orleans, I like Mulate’s because of the genuine Cajun food and live Cajun music and dancing. It’s such a fun place.

Music, obviously. Meeting and hanging out with musicians. Laughing, at myself, with friends, or at a professional comedian. The world needs more comedy!

Not really. Last “guilty pleasure” was “The Leftovers.” I like a lot of edgy comedy shows like “Mrs. Maysel” and “Curb Your Enthusiasm” and I know most Seinfeld episodes by heart!

Finally, and most importantly… what’s the best thing tourists coming to New Orleans could do that only locals really know about?

Neutral Ground Coffeehouse or Buffa’s, great music by local musicians who you won’t see on Treme’. Skip Jazzfest and go to the French Quarter Festival instead. It’s free and the music is more authentic.