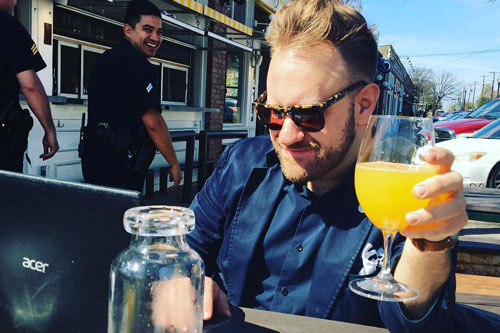 Tell us a bit about the career path that led to where you are now at Vitriol Radio Promotion.

Like practically everyone else in our little piece of the industry, it all started in college at my station, KURE in Ames, Iowa. I did every little thing I could on campus to get involved in music from hosting my show, writing for the paper and to working at our campus venue 3-4 nights a week helping with the shows and even helping out at a local label. All those connections added up to my first internship in radio promo where my coworker Jerry and I met and became fast friends. After I graduated, we started up Vitriol and haven’t looked back since.

I think the fragmentation of today’s media environment is exactly why college and community radio are still vital to not only a music community but to the industry as a whole. We all have so many things we can be doing and consuming at any time. Yet, independent radio is still the best place for a brand new band or artist to make an impact in their local area and also set the stage for advancement on a larger level. Everyone wants to ring the bell for the death of “traditional media” and I get it. You can tout the power of playlists and blogs and everything else, but I’ll still put my hand up for the stations out there that are truly engaging their community on a local level, and in addition helping to be the filter that makes it possible to bring the rest of the world to the people of their area. The Current in Minneapolis is one of the best examples of that. They’ve helped to break Minneapolis bands locally and set them to up make a go of it as well as having been the vehicle that develops music from other parts find their second home in the Twin Cities. It’s things like that I think the Internet hasn’t found a way to replace yet. The people of college/community radio being a part of their community can’t be taken over by an algorithm.

Oh man! There are so many of different magnitude and meaning, but they’ve all added up to an amazing experience throughout my career that I’m only hoping is just getting rolling. From meeting Brian Wilson backstage when we promoted his first record back after a long period of not making new music to seeing Metric just get bigger and bigger and see first hand how all their (and our) hard work pays off. I have some of my fondest memories traipsing all over the Lower East Side from being on tour or for conferences. I always love getting to travel and meet other people across the world who are just as passionate about music as me and connect with them because of it. If I have to boil it down, one really special moment recently was getting invited to Lollapalooza by one of our bands at a really difficult time in my life and I think I needed that experience to remind me what it was all about. That really filled my cup and will always mean a lot to me.

Growing up as a little kid, my dad always listened to country music, so some of that just became part of me, whether I liked it or not. I fought it very hard as I got older and developed my own tastes, but lately, I have been embracing that side of my history a little more. Of course having people like Kacey Musgraves, Sturgill Simpson, Chris Stapleton and Eric Church out there making great music in that genre really make it a lot easier.

I majored in advertising in college, so if radio hadn’t found me, I’d likely have found a way into that world, either as a copywriter or project manager. If I weren’t doing radio promo but still in the music world, I’d likely be tour managing or tried to find my way into licensing or supervision.

This is a hard one for me because I know there are so many places I still haven’t seen. Europe is probably first on the list. My people come from Germany, so I’m imagining Oktoberfest, followed by a trip to Norway, where the rest of my family hails from. Everything I’ve seen from TV and pictures is beautiful and I can’t wait to take it all in someday. Living in Minnesota, you tend to tie your travel dreams to warm places, so I think Costa Rica or the coast of Spain would be AMAZING someday as well.

Definitely would want to stock up on some recording gear and start up a studio where I can go anytime I want and record any kind of song I want whenever I want. That’s been my ultimate dream in life and will never change. Probably should take one of those trips I just mentioned too.

I’m as sad as anybody to see Game of Thrones go because I feel like we might never have this kind of mass cultural, watercooler show that you can talk to almost anyone in your life about. That said, there’s some amazing stuff out there streaming. If I could find a way to have them churn out seasons of The Marvelous Mrs. Maizel, I would. Barry is refreshingly good and Shameless is a stand-by. Killing Eve is probably the other one I’d tell people to check out. I cut cable for a while, but then moved in with my girlfriend who has it, so I’m taking suggestions of things to add to the DVR besides M.A.S.H. reruns and Desus and Mero. Anything to keep me from rage-watching CNN like politics is sports.

When friends come to Minneapolis, what is your favorite restaurant you take them to?

When I travel I love getting the thing I can’t get anywhere else, so we’re probably going somewhere with as many local beers as possible. Minneapolis is also the home of the Jucy Lucy (look it up), so we’re gonna go sit at Obama’s table at Matt’s and get a classic one there, maybe follow it up with a fancy one at Blue Door. The next morning, we’re soaking it all up with a breakfast at the CC Club, where the Replacements used to hang out, way before I even moved here. And where your good friend Jesse also made and lost a few memories as well.

You’re stranded on a desert island. What five well-known people (dead or alive) would you like to have there with you?

David Sedaris, so he could tell us stories.
My Dad, so he could build us shelter.
Tom Hanks, because he’s an American Treasure and has clearly been through this before.
Guy Fieri, so we have someone to cook until it’s clear we have to resort to cannibalism and that way we know who the first to go is.
A Wright brother, so we could build a plane to get us the hell off this island.