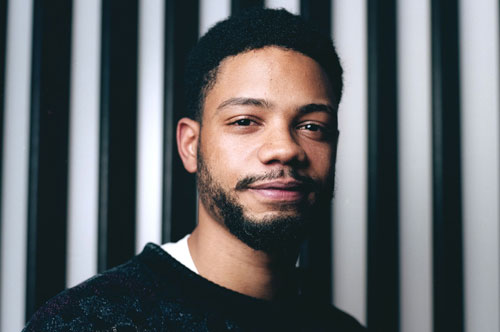 Tell us a bit about the career path that led to where you are now at Marauder.

During my undergraduate years at Brown University, I was INCREDIBLY lucky to be a member of the Brown Concert Agency, which books the annual Spring Weekend concerts. Some of the artists I’m most proud of bringing to campus through the group are Kendrick Lamar (just after Good Kid, M.A.A.D City!), Deerhunter, and Kelela. Following undergrad, I started writing show reviews, interviews, and album reviews for a local nonprofit paper in Boston called Boston Hassle, which led to me writing for NYC blog ThrdCoast, through which I connected with former Marauder Media Relations Specialist, striking up a friendship that eventually brought me here!

College/Community Radio matters because we need youthful energy contributing to what ends up on the airwaves! They’re always hungry for new sounds and often give us fresh insights into the music we’re working on. I’ve gotten tons of recommendations from college MDs that have shaped my own tastes. It’s a critical, symbiotic relationship.

My favorite experience so was attending M for Montreal last year! I met so many wonderful, passionate folks in the industry and was lucky to catch several artists (Nuria Graham, Corridor, Helena Deland) that have become personal favorites since. I also have to mention that promoting the late, impossibly great Her’s debut album ‘Invitation to Her’s’ was my absolute favorite project so far. I’m exceedingly blessed to have played any role in bringing them to new ears across the country – to have worked with them during their tragically brief career was an honor.

Since my college days, I’ve had a deep love for Post-Rock music, while deeply despising how pretentious that genre title sounds. Extended instrumental passages and ambient influences are my go-to during noisy commutes and chilling out at home. See: Do Make Say Think, toe, Tortoise, MONO.

I like to think that I’d enjoy being a bike messenger, but biking in NYC is straight-up terrifying. Honestly, I worked in a children’s library for a hot second, and I’d likely be doing that if I weren’t involved in this. There’s literally no better feeling than experiencing the joy of kids discovering the possibilities of language right in front of you.

Watching too many Instagram stories from friends at Primavera Sound has convinced me that I need to get out there next year. The oncoming Pavement reunion at next year’s fest has absolutely sealed the deal.

I’m opening up affordable practice spaces in NYC, no doubt about it. This city has dozens of incredible arts communities that are starved for space to practice their craft but can’t afford the exorbitant rent on top of their already exorbitant regular rent. I’ll take a small cut to buy a few pieces of gear for myself, of course!

Chernobyl is my life right now, and I watch Desus & Mero religiously.

I live in Bushwick, so I have to shout out my favorite local spots: La Isla, a phenomenal, mad affordable Latin American place with FIRE chicken, and Sushi King, which opened up not too long ago with fantastic sushi and the sweetest couple as the owners. Keep it local, y’all!

1) Cate Le Bon – her new album opens up worlds of imagination and she learned to build furniture recently, which is a very handy and underrated skill!
2) Bradford Cox – because I’m ready for that collaborate album with Cate Le Bon and if it takes being stranded on a desert island for me to hear it, then so be it.
3) Hanif Abdurraqib – probably my favorite living writer at the moment. If this is the end, I’d like to have the story be told as beautifully as he knows how to.
4) Vince Staples – because the man is a national comedic treasure.
5) Rihanna – if she can survive that god awful ‘Guava Island’ movie with Donald Glover, then she’s well equipped to help us survive anything.”