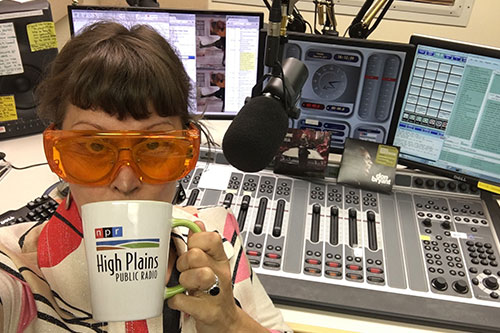 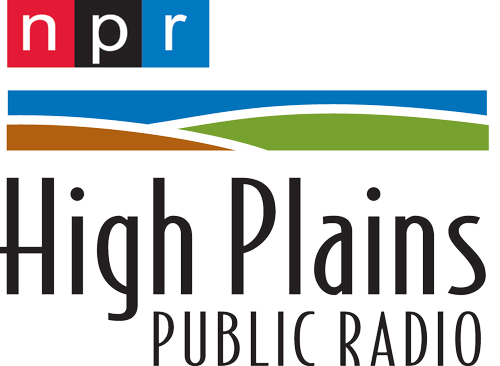 Tell us about High Plains Public Radio.  How it got started and what communities it serves.

As far as public radio goes, High Plains Public Radio is a weird one. Our network of 19 stations and translators serves 78 counties across a five state region of the High Plains—one of the largest service areas in the US. We provide coverage to Southwest Nebraska, Eastern Colorado, Central and Western Kansas, and the Panhandles of Oklahoma and Texas. Yup, that’s FIVE STATES…but some claim we have more cattle than actual people.

The idea for HPPR was hatched by our founder, Quentin Hope, in 1977. He was living in rural Kansas and wanted open access to great public radio, like NPR programming, for those in the region. The idea was to enrich the educational, cultural, and community life of the area, while celebrating the common heritage and musical roots. He launched it by broadcasting in 1980 with a single station, KANZ-FM, serving southwest Kansas from a grade school in Pierceville, KS. It has since expanded, incrementally, as interest was profound. While we are geographically widespread, our community remains tight-knit. This station would be nothing with our dedicated members, volunteers, partners, underwriters, contributors, listeners, and staff.

How long have you been at High Plains Public Radio? What is your history there?

It’ll be three years in December, which is not very long – especially since I’ve had no previous training in radio. I moved to the High Plains with my husband after he landed a great job teaching English at West Texas A&M University. (Ahem, go Buffs.) Since my background was ad copywriting and publishing, and I didn’t see many opportunities in the area, I figured I’d just freelance and volunteer. I immediately donated to the local public radio station (AS ONE DOES!) and offered to help them with promotions pro-bono. I met the team quickly, and BOOM, this job opened up. The previous MD was beloved in our region, so everyone said the same thing: “You’ve got pretty big shoes to fill.” So I’ve been trying to fill them ever since.

What makes High Plains Public Radio unique in the radio markets you serve?

Well, for our entire five-state region, we’re the sole NPR-affiliate station. That is to say, if you’re hearing Morning Edition or All Things Considered on the FM dial, that’s us. Also, we’re one of only a handful of community licensees, which means we’re not affiliated with any public or private institution or organization (read: folks with money). We’re alive because of our loyal listeners, which still blows my mind. Our people fund our programming. They are lifelong learners who care deeply about having stable access to public radio.

Oh, dang. I knew you’d ask that. It’s too hard to pick one! So I won’t. Can I get away with a three-way tie? Okay, good! First, I love the new release from The War & Treaty, Healing Tide. This troupe of geniuses played an HPPR Living Room Concert for us last year, and I knew they’d continue knocking the socks off of everyone currently wearing socks. Second, I am very into Bedouine’s self-titled debut album. Every song feels like falling asleep on a blanket in the shade in the springtime but, like, without bugs. They’re like audio Xanax, and her lyrics are pure poetry. Finally, I want to recommend a new Dust to Digital box set, Voices of Mississippi: Artists & Musicians Documented by Bill Ferris. It’s a concert, a history lesson, an audio documentary, and a cultural celebration of the American south. It has Delta blues, fascinating stories, gospel music, and more.

Townes Van Zandt. Anytime, any day, any mood. Always is a time for Townes®. (I warned you I was a copywriter.)

Best live show I ever saw, and I don’t even normally listen to this kind of music, was that Japanese noise band, The Boredoms (later known as V∞redoms). It was in Chicago. My pal wanted to go, and I kind of hate aggressive, scrapy drone music; a lot of it makes me feel like someone’s ripping off my face with dull sewing scissors. But wow. We walk in and there are four drum kits set up, and when they start playing, this thick wave of pulsing energy just washed over the room and turned us all into copper coils, vibrating together. (And no, I was not high…though judging from the room, I might have been the only one.) Again, not my favorite genre, but sometimes live performances are truly transformative. Second place: Dolly Parton. (Duh.)

You report Folk to NACC.  Who is an artist or band as far removed from that domain that people might be surprised to know you love?

Fall is on the way.  What’s your favorite part of this time of year?

What event in your life would you say shaped you the most as a person?

Living on campus in college. It’s true that, if you’re lucky, you’ll find a whole family of friends that’ll last you a lifetime…and maybe even snag a partner. Hey-ohhhhh!

I’m thinking about the time when that first glob of goo slurmed out of the pond and started trotting about on the shore moss in the early cycles of life on earth. Can we rewind that far? I fully understand that I’d be only an omnipotent energy.

Do you have a favorite restaurant in Amarillo you always make sure to take guests/visitors to?

At the end of the documentary Bombshell: The Hedy Lamarr Story, she quotes a poem by Kent M. Keith  called “The Paradoxical Commandments” – and the entire thing is the best advice I’ve ever heard:

People are illogical, unreasonable, and self-centered.
Love them anyway.

If you do good, people will accuse you of selfish ulterior motives.
Do good anyway.

If you are successful, you will win false friends and true enemies.
Succeed anyway.

The good you do today will be forgotten tomorrow.
Do good anyway.

Honesty and frankness make you vulnerable.
Be honest and frank anyway.

What you spend years building may be destroyed overnight.
Build anyway.

People really need help but may attack you if you do help them.
Help people anyway.

Dog or Cat? Meow.
Cold drinks or hot ones? I mean…context is key. But hot, overall.
Morning Person or Night Owl? You’d think they’d have asked the host of a morning show during the job interview, but TOTAL night owl insomniac freaque.
City or Country? Yes.
Watch TV or Read A Book? Binge streaming true crime docs like a blob.
Winter or Summer? It’s always summer in Texas.
Dine or Delivery? The only place that delivers to my house is Domino’s.
Fly or drive? I have a Prius for a reason.
Pants or Shorts? The world doesn’t need to see my knees. (You’re welcome.)

I’m deep into Kath & Kim at the moment.

I watched 45 Years in a Garden City, KS hotel room during the Tumbleweed Festival. That was INTENSE, but I loved it.

Finally, and most importantly:  We’ve heard the stars at night are big and bright deep in the heart of Texas.  Are they as bright in Northern Texas?

We’ve got it pretty good. *Bling!*