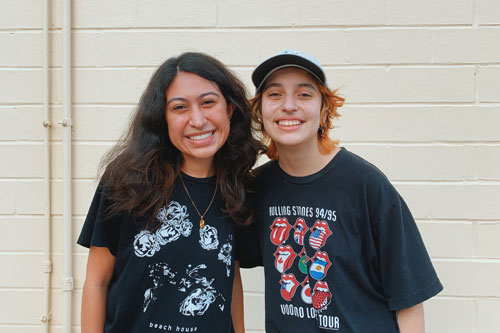 March MDs of the Month:

How long have you two been involved with KTSW and how did you first hear about the station?

Iliana Ramirez (IR): I have been a part of KTSW for 3 years now! When I was moving into my dorm freshman year, I was flipping through the radio stations and came across KTSW! I really enjoyed the music we were playing at the time and immediately wanted to be involved. When the semester began, I would see the KTSW tents set up around campus, so I asked how I could be a part of the station and joined the following semester!

Faith Vara (FV): This will be my second full year after joining the station my second semester freshman year! I had initially heard about KTSW before coming to Texas State and had planned on joining my first semester, but unfortunately a glitchy phone caused me to miss out on that opportunity. Bit thankfully I was able to join the following semester, and I’ve been a part of it ever since!

Getting DJs to seek out and play the new music you are sent can be challenging. What are some of the ways you work to get your on-air staff to play new music during their shows?

FV: We have a pretty large and dedicated music staff who’s always eager to get their hands on new music to review. We’re constantly sending music back and forth with them to get their opinions and see if they’d be a fit for on-air, and we even divide them into more specific sounding groups like hip-hop and local music

What have been some of the biggest obstacles your station has faced during the pandemic and how have you dealt with them?

IR: Previous to the pandemic, we had a very active presence around campus and in the San Marcos community in general. We would hold events on and off campus, which allowed us to really connect with the community. Because we cannot have large gatherings right now, I think it has been challenging trying to find other ways to interact with the community.

FV: As Iliana said, our community presence has definitely been drastically affected. I was part of the department that would put on shows around San Marcos, so it was pretty disheartening when it all had to come to a halt. However, we have many new staff members who are super engaged in their roles within the station and have a genuine desire to make KTSW as best as it can be, so that has definitely helped with some of the obstacles.

What was your favorite album released in 2020?

IR: This is a tough one and I can’t choose one so I would have to say my top 3 (in no particular order), are Mordechai by Khruangbin, The Slow Rush by Tame Impala, and 12th House Rock by Narrow Head.

FV: I would say my favorite album of 2020 has to be Chip Chrome & The Mono-Tones by The Neighbourhood. I really didn’t anticipate it being my favorite especially after the singles came out, but repeated listens made it impossible for me not to love it.

IR: Khruangbin is a band that I will never get tired of! I probably listen to them every day. As for album, Golden Hour by Kacey Musgraves has been one of my staples for months now. I love how beautifully written it is!

FV: My favorite artist that I could never get tired of is The 1975. They’ve been my favorite since I was 14, and that’s mostly due to their constant genre-jumping and ability to keep you on your toes. My favorite album is by Disintegration by The Cure, another band I consider to be extremely versatile in their sound and just their whole aesthetic honestly.

IR: Ahh another tough one!! I’d have to say Solange or Arcade fire for this one!

FV: I’d have to say The 1975 again! I’ve gotten to see them four times over the past couple of years and each time I saw them was just even better than the last!

Who is an artist or band totally outside the realm of the music you play on KTSW that people might be surprised to know you love?

FV: Recently, I’ve gotten super into Dua Lipa, specifically her latest album Future Nostalgia. She’s definitely more of a top 40 artist, but I find her songs to be insanely catchy and fun. I think had the pandemic never happened, she really would’ve taken off in the dance/party music scene.

IR: We’ve been playing this band called Mint Field who is an indie rock band from Mexico City. Most of their music is in spanish and I love when we get to play international artists on air because I feel like it really adds to the diversity of our sound. I’ve gotten really into spanish rock music in the past couple of years, so I was totally psyched when we got their music sent to us!

What are you most looking forward to doing again that you haven’t been able to do during the pandemic?

IR: Attending concerts and music festivals for sure!!

IR: I’m not sure if this would exactly count as an event but I think moving away from my hometown to San Marcos has been something that has really shaped me. I have grown and matured so much as a person and have met so many people that mean so much to me and have taught me so much.

FV: Going to college has shaped me more than I ever expected it to. I’ve gained confidence and relationships I never thought I’d be lucky enough to have. I’ve been both the happiest and saddest I’ve ever been, and all those ups and downs have helped me grow stronger, kinder, and in general just more grateful for the life I have.

IR: The 80s. The music and fashion were just insane back then!

FV: I would LOVE to travel back to the ‘80s because that’s by far my favorite decade of music. However, I’ve always had a slight desire to be a hippie in the ‘70s as well, so either would work with me!

Do you have a favorite restaurant in or around San Marcos (dine-in or take out) that you recommend people try?

FV: Either Toro Ramen and Poke Barn or Gumby’s Pizza.

IR: Spending time with my family and friends!

FV: Music has always been a constant in my life, but I think having a good support system is truly what brings me the most joy.

Sunny or Rainy?  IR: SUNNY!  FV: Sunny but without the hot!

IR: I recently started watching the sopranos and i’ve been really enjoying re-watching freaks and geeks now that it is streaming on hulu! For movie, I watched Clerks for the first time last month and loved it!

FV: I’ve recently been watching lots of reality TV, and just binging past seasons of random shows like Jersey Shore and The Bachelor franchise (I’ve also been keeping up with this current season). As far as movies, I’ve been watching lots of female-led early 2000’s movies like Bring It On and Legally Blonde recently, and those are always some of my favorites to watch!

Finally: Saxophone solos in a song… 80s cheese or gutsy and triumphant?

FV: I personally LOVE a good saxophone solo. In fact, I think a good sax solo can even make a song better!