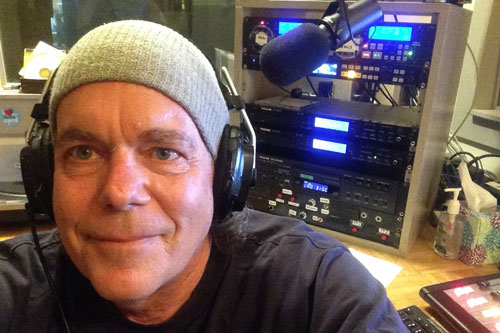 June MD of the Month: 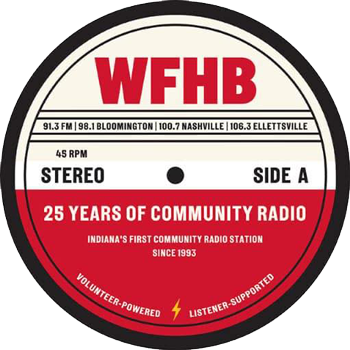 You’ve been involved with WFHB from the very beginning. Tell us how things came together and what the impetus was for starting the station.

Got a few hours? In 1975 I was a Telecommunications and Film Studies student at Indiana University already doing eclectic mix shows on WQAX Cable FM 100.3. There was a very creative music scene in Bloomington at the time. I joined a group called Community Radio Project, a non-profit formed in 1974 to work towards getting a non-commercial community radio station on the air so the local music scene could be heard on the radio.

We had no idea this was happening elsewhere, we just wanted to create an alternative to commercial radio that wasn’t college or public radio. Grassroots independence is what we’ve always strived for.

Some of us attended the second National Alternative Radio Conference in Telluride, Colorado in June of 1976. There we met the late Lorenzo Milam (the Johnny Appleseed of community radio), the founding crew of NFCB (National Federation of Community Broadcasters) and people from around the country who already had community radio stations on the air.

This was a tremendous networking and learning moment in the pre-internet days. That fall we got busy organizing with a clearer vision. In 1981 our first FCC application was rejected due to Channel 6 TV audio interference problems, but we kept trying. Our second application was challenged and awarded to an applicant in an adjacent county due to their first-service advantage. Our third application was approved and by January 1993 we were on the air.

What have been the most challenging and most rewarding parts of your job over these 28 years?

The most challenging parts were all related to the fact that in my 28 years at WFHB there have been 15 GMs. I could tell a lot of horror stories about those tough times, but I’ll leave it to the imagination. For the last five years we’ve had an awesome GM who is committed to the station long-term and has a great vision for the future. Things are much, much better now.

The most rewarding parts are the creative side of being MD at a station dedicated to eclectic mixing and local cultural diversity located in an awesome music town like Bloomington, Indiana. A big part of this was mentoring hundreds of volunteer DJs over the years to present that eclectic diversity on the air in a way that connects with listeners.

What has changed the most since your early days at the station?

Technology. When WFHB first went on the air, the internet was barely there and digital audio was only high-end and ultra expensive. Computer tools have changed everything in our operation in terms of how we get our creative work done, but it hasn’t changed our mission or the range of what we present.

What advice would you give a music director just starting out today?

There is more great music now than even the most open-minded station has the time to play, so don’t stress out about getting to it all because you can’t. Curate your music library with your community in mind. Pay attention to your local music scene and what touring bands connect with local fans. Try hard to get live music and interviews on the air. Always keep in mind that you work for your radio station, not for music promoters and labels. Don’t curate new music through the lens of your own personal taste, learn to appreciate all genres. Give your DJs a lot of creative freedom.

What has been your favorite album released so far in 2021?

You’ll have to flip a coin between Jupiter & Okwess Na Kozonga and Tune-Yards Sketchy.

Which artist/band has put on the best live show you’ve ever seen?

I’ve been seeking out great live music for over fifty years, so that question is impossible to answer. That said, the midnight to 4am set by My Morning Jacket at Bonnaroo 2008 ranks right up there with seeing Led Zeppelin in my hometown of Evansville, Indiana, in 1970, two weeks after their second album was released.

Who is an artist or band totally outside the realm of the music you play on WFHB that people might be surprised to know you love?

Honestly, nothing is outside the realm of WFHB. But, people who only know me from my radio programs and MD work might be surprised I am a huge fan of experimental and outside improvised music. I record regularly with a collective of like-minded friends and we have 350+ tracks on SoundCloud under the name of A51 Secret Files.

I would love to hear American roots music that was happening 1880-1910, before there was recording technology. Particularly Black string bands of the lower Ohio River valley.

Given all the time we’ve spent at home recently, do you have any current favorite shows you’re enjoying/binging?

I grew up around a television station and I’ve worked in TV and video production. Consequently I don’t watch TV and dropped cable in 1996. I’m a film snob that only watches films on Criterion Channel when I feel like it – which is not much lately because of constant pandemic computer screen time working from home.

How about a movie (new or old) that you’ve watched recently that you loved?

The Criterion Channel is always heavy with Noir choices. My latest find was Odds Against Tomorrow, directed by Robert Wise in 1959, starring Harry Belafonte, Robert Ryan and Shelley Winters.

Finally, now that you are leaving your position at WFHB, what do you plan to do with the next chapter of your life?

First, I’m taking a year off to stay away from computers as much as possible. I’ll be trying to write more, by hand, to see what ideas and memories surface. After a year I’ll pursue a variety of creative interests and see what presents itself. I could possibly return to radio in syndicated or podcast form. But, who knows.