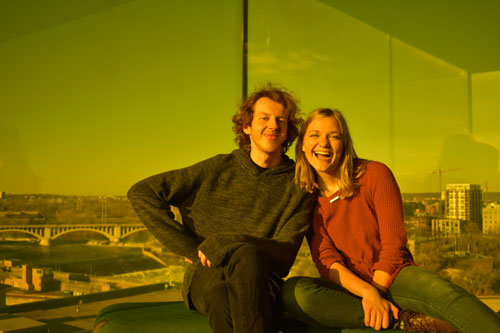 December co-MDs of the Month: 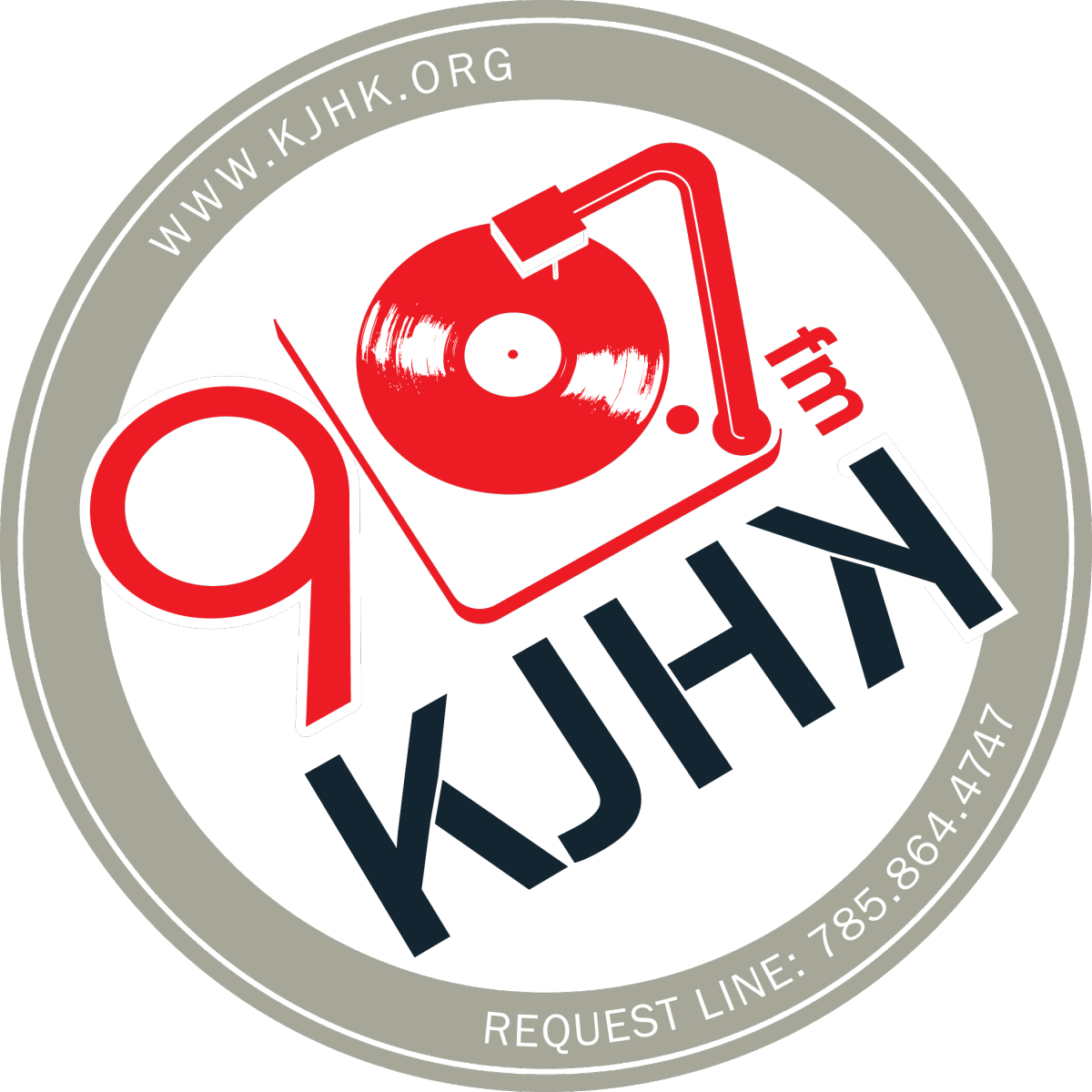 Tell us about KJHK. How it got started and what makes it unique in the Lawrence radio market.

(Patrick) KJHK has always been about providing genuine and personalized broadcasting to the KU and Lawrence community. KJHK’s ties to the music / cultural scene in Lawrence have been entwined since it first started airing.

(Miranda) Since 1975, KJHK has been housing alternative music, creative content and free form programming. KJHK is a great place for local artists to shine and provides niche programming opportunities creating a welcoming environment for everyone.

How long have you been at KJHK? How did you first hear about it & what is your history there?

(P) I got involved at the beginning of my junior year. I was good friends with our current station manager, Lorena de la O (our hero), from the year prior when we both lived in the dorm and would go to shows all the time. She convinced me to join street team and music staff, then I eventually started DJing and applied for music director.

(M) I first heard about KJHK during freshman orientation but it wasn’t until I attended a meeting with Lorena, my RA at the time, (wow we owe her) that I got involved. Since then I have been DJing and participating in staffs ever since!

How do you get your DJs to discover/listen to/play the new music that comes in that they aren’t familiar with?

(P) I send an email to our DJs and music staff with each week’s charts & adds that get submitted to NACC. We also have a program called “now playing” that I basically just use to talk about and play my favorite songs we have in rotation. Miranda & I also have weekly music staff meetings where we get together with other members of KJHK to talk about new submissions to the station.

(M) In addition to Pat’s dope charts & adds, we maintain a DJ dashboard that is up in the studio with an album of the week as well as descriptions of the new music in our rotation.

What was your favorite album of 2018?

(P) For me personally, I have Hypnic Jerks by Spirit of the Beehive as number one on my list (so far). The whole thing is just so good from top to bottom, and I’ve consistently been returning to it ever since it got sent to us. Also I just have to add that Tiny Engines has been absolutely killing it this year with everything they’ve helped put out. Miranda and I do agree on what the true 2018 AOTY is though…

(M) If Patrick and I had to have a collective favorite album, it would be “Positive Affirmations for Middle Managers” by Your Future Self (seriously check that out). However, individually Blood Orange’s “Negro Swan” is my favorite album of the year. Dev Hynes embraces an intimacy with listeners and explores the struggles of growing up black and bullied, and the anxiety attached to that and it is everything.

(P) I don’t think I’ll ever get tired of Alex G. There are a lot of artists whose music can just put you in a whole other world, but his is definitely my favorite to be in. I feel like all his songs are connected in that way, and re-listening to any of his albums feels like revisiting an old home town or something. I don’t know if that makes any sense, but I just love the familiarity of his music.

(M) The National. I will never ever get tired of Matt Berninger’s crooning. They are one of the only bands I know that can put me in any mood on the spectrum.

What is the best live show you have ever attended?

(P) A show I still think about all the time is Joyce Manor, The Hotelier, and Crying in Lawrence back in 2016. I knew Joyce Manor would have a fun set, and Crying had just put out one of my favorite albums of that year, but I was absolutely entranced by The Hotelier. To this day whenever I listen to Home, Like NoPlace is There I’m always back in that headspace just shouting along to each song. Right up there with them though is the last show I went to, which was Boygenius in Minneapolis with some fellow KJHK cuties. Miranda showing us First Avenue was really incredible!!

(M) The first time I listened to Stella Donnelly’s “Boys Will Be Boys” I think I listened to it for an hour on repeat. I’ve been hooked ever since, but since she only had an EP and was from the land down under, I didn’t expect to see her so soon. When I found out she was stopping by Kansas City with Natalie Prass this October, all I could do was wait. Stella was cuter than I could have ever imagined and so profoundly talented that she easily made it my favorite live performance. (bonus points because I got to go with Pat!)

Who is an artist or band completely outside the realm of college radio that people might be surprised to know you love?

(P) It’s just one album, but Halcyon by Ellie Goulding is definitely one of my all-time favorites. I haven’t really listened to much she’s released since then, but that album has some super hard hitting songs on the second half that just kill me every time. Also My Chemical Romance but I don’t feel like I need to elaborate on that.

(M) Charlie XCX, I don’t even consider it a guilty pleasure because I love her so much. If you haven’t, I’d highly recommend rolling your windows down and playing some XCX cause I can’t think of a better driving jam.

What is your favorite childhood memory?

(P) I don’t have anything specific, but skateboarding was so huge for me growing up. I remember being so excited to get home from school and just ride around my neighborhood for hours, and if the weather was bad I’d just practice in my garage. Plus I still remember watching Fully Flared for the first time and absolutely losing my mind during the intro (and still do today).

(M) My mom probably hated when I did this, but one of my favorite things was to grab a ton of random liquids from the kitchen and take them all out to the front porch. Here my “cauldron” would be waiting for me to make my witchy brews.

(P) Easy cop out answer but both of my parents. When I dig through their old records & tapes it makes sense (for the most part) why I’m into what I am today.

(M) Music is obviously a huge part of who I am today and I have to thank my sister for introducing me to music other than the Top 40 my parents played in the car. It is thanks to her that I want to work in the music industry and find joy everyday in music.

(P) The possibilities are so overwhelming I’d just stick to something simple. I’d go back like 5-10 years and try to see/enjoy all the bands I love that are broken up/inactive. Or maybe take it further and go back to being a single celled organism & not having any responsibilities.

(M) I would love to get prehistoric, I’m talking Isla Nublar filled with tons of dinos. One thing I’ve never understood is our concept of a dinosaur sound. No one who has heard one lived to tell it, so they probably sound nothing like we imagine.

Do you have a favorite restaurant in Lawrence you always make sure to take guests/visitors to?

(P) This place called Terrebonne is always my go-to. Jamie Martin, our program director put me on to it this past summer and I probably go at least once a week now. They’re known for their po’ boys & Cajun food but they have all sorts of good stuff. It’s such a treat every time I go.

(M) Zen Zero, I’ve been hooked since the first time I went there. They have dishes from Nepal, Tibet, Thailand, Vietnam & Japan and I am lucky enough to have friends who love it just as much as I do!

(P) The amount of times I’ve sought guidance from Nana Grizol lyrics is too high for me not to have something from them as my answer. It’s almost impossible to boil it down to just one line but I think “don’t listen too closely to nobody just trying to make themself feel better with a song” feels appropriate here.

(M) I could potentially answer this in a serious tone, however I’m not much of a serious person. That being said, I remember someone telling me that they had to put any extra syrup they didn’t eat from their pancakes in their armpits. While I have no way to verify if this was true, I have since been much less wasteful.

Do you have any current favorite TV show obsessions?   What has been the best movie you’ve seen this year?

(P) People at KJHK are probably tired of me talking about it. But every fall I become absolutely obsessed with Over The Garden Wall. I could probably watch it 100 more times and still love every second of it. Also I can’t stop saying “ain’t that just the way” to literally everything. I’ve been behind on movies but “Won’t You Be My Neighbor” made me more emotional than almost anything else I’ve seen this year.

(M) I just finished season 2 of American Vandal and my inner teenage-boy could not get enough of that. As for movies, I’ll take a more sophisticated approach and say Ladybird.

Finally, and most importantly: When did you learn that Santa wasn’t real?

(P) I don’t remember how old I was when I first saw it, but I think in one of the Santa Clause movies they say something like “If kids aren’t believing in Santa, then who do they think is putting presents under the tree?” and someone said something like “they think their parents are doing it” and I thought about it for a second and was like, “yeah, that actually makes a lot more sense”

(M) Wayyy too late in the game, I remember I was at my friends house and they mentioned who was really giving them their gifts and I proceeded to hide in her closet and cry for awhile.