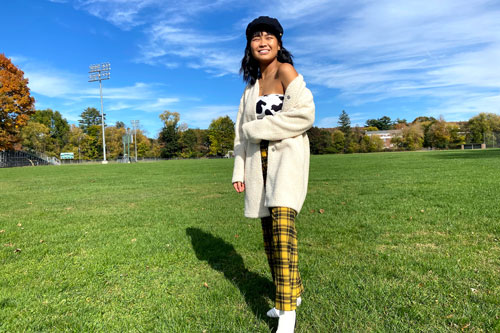 How long have you been involved with WRCU and how did you first hear about the station?

I’ve been involved with WRCU since the beginning of my sophomore year of college in autumn of 2019. I had been interested in joining the organization during my freshman year, but young, 18-year-old me was too afraid of pushing herself outside of her comfort zone. I finally decided to join as a DJ with the encouragement from one of my dear friends from high school, Lily Kuentz, who happened to be the station’s General Manager at the time. She had been a WRCU DJ since autumn of 2017, and it was through her that I started to learn more about college radio.

Getting DJs to seek out and play the new music you are sent can be challenging. What are some of the ways you work to get your on-air staff to play new music during their shows?

At the beginning of each broadcasting week, I distribute to our on-air staff a list of 10-12 songs from which each show must choose at least 2 to play each hour. The selections for this list are decided upon in collaboration with a smaller staff of DJs who help with the daunting task of sifting through all of the music our station receives from artists and promoters. In the past, the weekly list of songs — we call them “Rots” (short for Rotations) — was mostly comprised of new releases for the week suggested by our Music Staff. However, under this model, getting our DJs to play new music was near impossible. This semester, we began building our Rots exclusively with the materials we get from the myriad promoters who work with our station.

What have been some of the biggest obstacles your station has faced during the pandemic and how have you dealt with them?

The single biggest challenge we faced was the restrictions placed on access to our physical space. Because WRCU is completely student-run and because our on-air staff is composed almost entirely of students, Colgate University’s guidelines on student use of indoor spaces prohibited us from broadcasting directly from our station. In preparation for this unusual semester, WRCU’s Board of Directors worked tirelessly to transition our station to completely remote broadcasting. We were able to create virtual training modules for new and returning DJs, and DJs were then able to build and record their shows from home. With the help of our faculty advisors, we were able to upload those remote shows to our system and continue providing content to our listeners. As an alternative to remote radio shows, WRCU also began offering our DJs the opportunity of creating podcasts, which are currently hosted on our station’s website (wrcufm.org)

What has been your favorite album of 2020 so far?

The Miseducation of Ms. Lauryn Hill​. I have such a deep connection to this album, it’s hard to put it into words. There are few albums in my opinion that match the thoughtfulness, care, and intimacy which Lauryn Hill imbues into this project.

Back in high school, I went to one of Kendrick Lamar’s shows on his “Kunta’s Groove Sessions” tour. Unlike his other tours, he chose to perform at a smaller venue in Cleveland. The atmosphere of this smaller setting, compounded with the energy of his live band and his unparalleled stage presence, created a concert experience which was so moving, emotionally intimate, and electrifying than all other shows I have attended since 2015 pale in comparison.

Who is an artist or band totally outside the realm of the music you play on WRCU that people might be surprised to know you love?

Alexander Scriabin. He was a Russian pianist and composer at the turn of the twentieth century who was largely influenced by Chopin. Classical music has always been a big part of my life, not only because my parents raised me on Baby Mozart, but also because I began studying viola and piano at a young age. I love Scriabin because you can hear the influences of Chopin in the melodies and emotional heights of his compositions, but Scriabin recontextualizes these elements in a more obscure tonality dripping with dissonance, especially in his later work.

My best childhood memory is making up nonsense songs with my younger brother, PJ. He and I are only two years apart, and when we were younger, we consumed a lot of the same media. We would often hear a phrase or a word that sounded silly to us, and build whole stories, rhythmic patterns, and melodies around a single word or sequence. Our family was probably not as enthusiastic about these songs as we were. We still sometimes make songs like these today, though the songs we make today are a little bit more coherent than the songs we made then. But only a little bit.

The event that shaped me most as a person was probably the collective experience of my first semester in college. It was my first time living independently away from home, my first time being away from the friends I had loved for ten years, and the adjustment was less than smooth. That first semester in college made me truly appreciate the value of having a home, of having the unconditional love and support of your friends, and it taught me the importance of advocating for yourself and engaging in self-care. I learned so much in the span of three short months, not just the material taught in the classroom, but also about myself and all of my relationships.

I would travel to New Orleans at the turn of the twentieth century. I don’t want to romanticize that time and place because obviously it was not a great time for people of color, especially Black people. However, I think it would be incredible to see those live performances by artists like Buddy Bolden that would lay the groundwork for Jazz music.

Colgate is in a ​very​ small, rural town, so here aren’t many restaurants nearby. Since I’m from the Cleveland area, I’ll give a recommendation for that city. Li Wah is a dim sum restaurant on Cleveland’s West Side, close to Downtown. I’ve been going to this restaurant with my family since birth, and honestly, the dim sum here parallels (if not exceeds) the quality of dim sum I’ve tasted in San Francisco and New York. It’s so good for no reason at all, because who ever goes out of their way to visit Cleveland, Ohio’s Chinatown?

Hanging out with my cat, Eugene. He’s so smart and attuned to my moods, so he knows exactly when it’s time to play, when it’s time to nap, and even when I’m in need of a little comfort. Leaving him behind at home is always the hardest part of returning to school at the beginning of each semester.

Narcos!​ I watched all three seasons of ​Narcos​ and two seasons of​ Narcos: Mexico ​for the first time at the beginning of quarantine back in March, and I truly could not believe I waited that long to start it. The story is obviously so interesting, but this show really shines in its soundtrack. I think everyone who has seen the show can agree that the theme song by Rodrigo Amarante is unreasonably good. A movie that I have been revisiting throughout this socially-distant year is the 2005 adaptation of ​Pride and Prejudice​ with Keira Knightley in the lead role. This movie has been one of my favorites since its release, even though my 5-year-old self definitely did not understand about 80% of the dialogue. It’s based on a book that holds a special place in my heart, and though it’s certainly not the fan-favorite adaptation of this book, I think it’s a beautiful period drama with an amazing soundtrack and an incredibly stacked cast. Can a movie really be that bad with Keira Knightley, Donald Sutherland, Judi Dench, Tom Hollander, and Rosamund Pike among its stars?

Finally, what do you miss most about your pre-pandemic life?

I know I’m not alone in saying that I just miss hugs. The need to remain socially-distant prevents all of us from being able to simply embrace the people around us. This obstacle was particularly difficult to deal with upon returning home in March, and before returning to school in August. My grandfather was visiting from the Philippines at the time, and not being able to just hug him when I came back from college was really hard. I wasn’t able to reunite with my Cleveland friends, some of the most important people in my life, after being away from them for months, and the distance forced upon us by the pandemic was heartbreaking, especially considering the insanely joyous reunions we normally have at the end of each semester. Hopefully, all this waiting will make that first post-pandemic group hug all the more gratifying.